BIDS TO BE MERCERSBURG WATER AUTHORITY

Sealed bids for the above referenced contract will be received by the Authority at the above address until 11:00 A.M., prevailing time, Wednesday August 18, 2021. The Bids will be publicly opened and read aloud at that time, and then reported during the regularly scheduled Water Authority meeting held the next day.

The project consists of two Contracts, which are as follows….

Contract I – Site clearing, grubbing and creation of stone access

Official copies of the Bid Package will be provided electronically. The official Bid Package must be obtained through the office identified below, by emailing HTEnv@outlook.com and identifying “New Well Project” within the subject line.

Each Contract Bid shall be accompanied by a certified check or Bid Bond in an amount not less than 5% of the Bid total, payable to the owner, in accordance with the Instructions to Bidders.

This project is being funded, in part, through grant funding received from the Pennsylvania Department of Community and Economic Development through the Small Water and Sewer Program; and is part of the overall Water Filter Plant Improvement Project. As such, inclusion of applicable “Pennsylvania prevailing wage rates”, and compliance with other grant regulations will be required.

The Mercersburg Water Authority reserves the right to reject any or all bids, to waive any informality and to accept any bid that it may deem to be in the best interest of the Authority.

The successful bidder will be notified, in writing, within 60 days of the bid opening date of the acceptance of any proposal by the Owner.

BY ORDER OF THE MERCERSBURG WATER AUTHORITY

Mercersburg Borough is seeking a Full-time Public Works Department Employee to work full-time, 40 hours per week, plus overtime as needed. Must be able to perform basic mechanical skills, and be proficient with the use of hand and power tools. May require considerable standing, walking, frequent lifting of 50 pounds, occasional lifting of 50-100 pounds, frequent bending, squatting, kneeling, crawling, twisting, climbing, balancing, reaching, pushing and pulling. Able to operate all vehicles related to the construction industry including but not limited to dump trucks, snow plows, back hoe, mini excavator and various construction equipment and tools. Must be able to work in all types of weather including inclement conditions such as extreme heat or cold, rain, snow or ice. Minimum of a High School Diploma or Equivalent and a valid CDL License. Salary based on qualifications and experience, medical benefit package available. Send resume w/ salary requirement, experience and three references to: Mercersburg Public Works Department Employee Search, 113 South Main St., Mercersburg, PA 17236 or email Derek Stoy, Borough Manager at dstoy@mercersburg.org. Applications must be delivered to the Borough Office before on August 6 2021, EOE.

The Tuscarora Area Chamber of Commerce will hold the annual Mercersburg TownFest on Saturday, September 25, 2021. Activities include a food court, entertainment on the square, and over 100 Craft, Jewelry, Food, and Community Vendors.

The Tuscarora Area Chamber of Commerce will hold the annual Mercersburg SpringFest on Saturday, May 8, 2021. Activities include a food court, entertainment on the square, and over 100 Craft, Jewelry, Food, and Community Vendors. 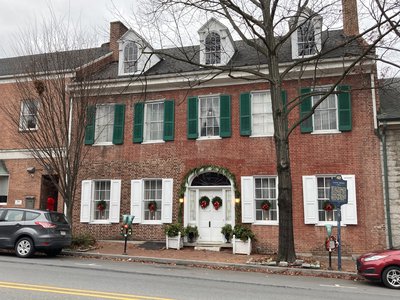